This list contains books about Punk rock music, Punk musicians and Punk subculture. There has been a many books written about Punk and Punks. We will single out the most popular.

100 Nights At The Roxy – by Michael Dempsey
This book is something special in that it succeeds in taking a moment of time capturing it and gives us a sense of the magic and excitement of that time. Quite simply its a pictorial history of The Roxy Club in Covent Garden in early ’77.

1988.The New Wave Punk Rock Explosion – by Caroline Coon
Follows the rise of such eminent punk groups as The Sex Pistols, The Damned, and The Stranglers and discusses the appeal of their violent nihilistic music.

And God Created Punk – by Erica Echenberg and Mark P
This work presents a visual documentary of what punk was really all about. The photographs of punks, including Shane MacGowan, capture them pogoing at the Roxy Club and dressed as cat women. 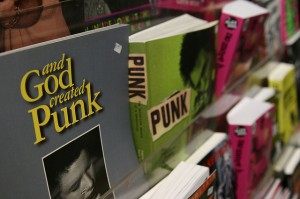 A Cultural Dictionary of Punk – by Nicholas Rombes
Book examines punk as a movement and place it in its cultural field.

Blank Generation Revisited: The Early Days of Punk Rock – by Lenny Kaye, Roberta Bayley, Stephanie Chernikowski and George Du Bose
Traces the history of punk rock and provides portraits of the bands who shaped the movement.

Burning Britain: The History of UK Punk 1980-1984 – by Ian Glasper
Burning Britain is the true story of the UK punk scene from 1980-1984 told for the first time by the bands and labels who created it.

The Boy Looked at Johnny: The Obituary of Rock and Roll – by Julie Burchill and Tony Parsons
This is singularly the most important and stridently semtexed analysis of the Punk Rock genesis in the late 1970s. This book features Iggy Pop, David Bowie,Blondie…

Chaos: “Sex Pistols” – by Bob Gruen
Photographic record of the Sex pistols career covering both eras of the band.

The Dance of Days: Two Decades of Punk in the Nation’s Capital – by Mark Andersen
Politically-insurgent punk scene is studied for the first time, by D.C. activist Mark Andersen.

England’ s Dreaming – by Jon Savage
England’s Dreaming is the ultimate book on punk, its progenitors, the Sex Pistols, and their time: the late 1970s.

Flash Bang Wallop!: Photographs of the Dawn of Punk – by Ian Dickson
This book features a collection of photographs along with quotes from artists such as: Sex Pistols, The Clash, Patti Smith, Iggy Pop, Blondie, The Police and The Jam.

From the Velvets to the Voidoids: The Birth of American Punk Rock – by Clinton Heylin
The definitive story of American punk rock.

Images of Punk – by Denis O’Regan
Book features over 400 photographs of punk legends such as The Clash, Poly Styrene and the Sex Pistols.

Not another punk! book – by Isabelle Anscombe
A snapshot in time with its images of everyday punks and fashion.

Please Kill Me: The Uncensored Oral History of Punk – by Legs McNeil and Gillian McCain
Please Kill Me goes backstage and behind apartment doors to chronicle the sex, drugs and power struggles that were the very fabric of the American punk community.

Punk an A – Z by Barry Lazell
An encyclopedia of the bands, venues and trends that revolutionalized rock music and street style.

Punk. – by Stephen Colegrave and Chris Sullivan
The Sex Pistols, The Clash, The Ramones, The Heartbreakers, Siouxsie and the Banshees all have had a chance to speak in this book which gives voice to the punk generation.

Punk Diary, 1970-79: An Eyewitness Record of the Punk Decade – by George Gimarc
A guide to the punk music of the 1970s. The facts are presented in day-by-day diary format and the text is complemented with graphics and photographs.

Punk Rock: So What?: The Cultural Legacy of Punk by Roger Sabin
Punk Rock So What?brings together a new generation of academics, writers and journalists to provide the first comprehensive assessment of punk and its place in popular music history, culture and myth.

Punk ’77 by James Stark
Guide through Punk underground in USA.

Punk: The Brutal Truth (Revealed) – by Hugh Fielder
The Brutal Truth offers a race through the first decade of punk, a climatic explosion that changed the face of music for a generation.

The Philosophy of Punk: More Than Noise!! – by Craig O’Hara
This book to gives an inside look at the thriving Punk subculture as an important present day movement, and as a way of life.

Rotten: No Irish, No Blacks, No Dogs – by John Lydon, Kent Zimmerman and Keith Zimmerman
John Lydon – aka Rotten – looks back at himself, the Pistols and their time.

Sex Pistols File – by Ray Stevenson
A chronicle of the saga, from the Pistol’s formation by Malcolm McClaren in 1975, to the break-up and Sid’s death in New York.

Sid Vicious: No One Is Innocent – by Alan Parker
Book brings a wealth of new detail to the story of Nancy Spungeon’s death, much of that gained from the New York Police Department and extensive interviews with Anne Beverley (Sid’s mother).

Sid Vicious: Rock ‘n’ Roll Star – by Malcolm Butt
Book tells sensational story, delving into the degradation of Vicious’ childhood, his introduction into the mayhem world of the Sex Pistols, his obsession with violence and his decline into heroin-induced paranoia.

Vacant: A Diary of the Punk Years 1976-79 – by Nils Stevenson and Ray Stevenson
Nils and Ray Stevenson worked on the fringes of punk from its earliest inception; Nils later became the Sex Pistols’ tour manager, Ray their publicist and photographer.

We Owe You Nothing – by Daniel Sinker
Collected interviews of Punk artists.