Hebdige Subculture: The meaning of style consists of two parts and nine chapters:

Part One: Some case studies

1. From culture to hegemony
2. Holiday in the sun: Mister Rotten makes the grade; Boredom in Babylon.
3. Back to Africa; The Rastafarian solution; Reggae and Rastafarianism; Exodus: A double crossing.
4. Hipsters, beats and teddy boys; Home-grown cool: The style of the mods; White skins, black masks; Glam and glitter rock; Bleached roots: Punks and white ‘ethnicity’.

5. The function of subculture; Specificity: Two types of teddy boy; The sources of style.
6. Subculture: The unnatural break; Two forms of incorporation.
7. Style as intentional communication; Style as bricolage; Style in revolt: Revolting style.
8. Style as homology; Style as signifying practice.
9. O.K., it’s Culture, but is it Art?

Richard “Dick” Hebdige (born 1951) is an expatriate British media theorist and sociologist most commonly associated with the study of subcultures, and its resistance against the mainstream of society. He is best known for his influential book in subcultural studies, Subculture: The Meaning of Style, originally published in 1979. Hebdige’s Subculture: The Meaning of Style builds on earlier work at Birmingham on youth subcultures. But whereas much of this research was concerned with the relation between subcultures and social class in postwar Britain, Hebdige saw youth cultures in terms of a dialogue between Black and white youth. He argues that punk emerged as a mainly white style when Black youth became more separatist in the 1970s in response to discrimination in British society. 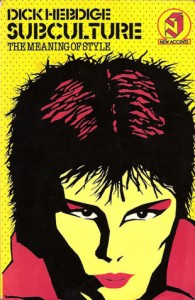 For Hebdige subcultures are not an inherent characteristic of urban life but rather a distinct milieu defined by style – teddy boys, punks, skinheads, and so on – craved out of contingent socioeconomic circumstances. Against the notion that the social life of subcultures develops in deviant isolation from status quo institutions (such as the state or the nuclear family), Hebdige’s book Subculture shows how these internally vexed group sare composed through mediating forces which shape their place in the larger contexts of the city and nation.

For Hebdige two Gramscian terms are especially useful in analyzing subcultures: conjuncture and specificity. Subcultures form in communal and symbolic engagements with the larger system of late industrial culture; they are organized around, but not wholly determined by, age and class, and are expressed in the creation of styles. These styles are produced within specific historical and cultural “conjunctures;” they are not to be read as simply resisting hegemony or as magical resolutions to social tensions- as earlier theorists had supposed. Rather subcultures cobble together styles out the images and material culture available to them in the effort to construct identities which will confer on them “relative autonomy” within a social order fractured by class, generational differences, work.