Anarcho-syndicalism is a branch of anarchism which focuses on the labour movement. Syndicalisme is a French word, ultimately derived from the Greek, meaning “trade unionism” – hence, the “syndicalism” qualification. Syndicalism is an alternative co-operative economic system. Adherents view it as a potential force for revolutionary social change, replacing capitalism and the state with a new society, democratically self-managed by workers. The term “Anarcho-Syndicalism” probably originates in Spain, where, according to Murray Bookchin, anarcho-syndicalist characteristics were present in the labour movement from the early 1870’s — decades before they appeared anywhere else. “Anarcho-Syndicalism” refers to the theory and practise of revolutionary industrial unionism developed in Spain and also later France and elsewhere towards the end of the nineteenth and beginning of the twentieth century.

Anarcho-syndicalism a school of anarchism

The early twentieth century saw the rise of anarcho-syndicalism as a distinct school of thought within the anarchist tradition. More heavily focused on the labour movement than previous forms of anarchism, syndicalism posists radical trade unions as a potential force for revolutionary social change, replacing capitalism and the state with a new society that is democratically self-managed by workers. Anarcho-syndicalists seek to abolish the wage system and private ownership of the means of production, which they believe lead to class divisions. Three important principles of syndicalism are workers’ solidarity, direct action (such as general strikes and workplace recuperations), and workers’ self-management. Anarcho-syndicalism and other communitarian branches of anarchism are not mutually exclusive: anarcho-syndicalism often subscribe to communist or collectivist school of anarchism. Its advocates propose labour organizations as a means to create the foundations of a non-hierarchical anarchist society within the current system and bring about social revolution. 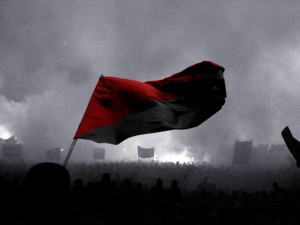 The basic principles of anarcho-syndicalism are workers’ solidarity, direct action and self-management. They are the manifestation in daily life of the application to the workers’ movement of the libertarian principles of anarchism. The anarchist philosophy which inspires these basic principles also defines their purpose; that is, to be a tool of self-emancipation from wage-slavery, and as a means of working towards Libertarian Communism.

Solidarity is simply a recognition of the fact that other people are in a similar social or economic situation, and acting accordingly.
Simply stated, direct action refers to action undertaken directly between two individuals or groups, without the intervention of a third party. In the case of the anarcho-syndicalist movement, the principle of direct action has a specific meaning: the rejection of participation in parliamentary or statist poltiics and the adoption of tactics and strategies which place responsibility for action firmly in the hands of the workers themselves.
The principle of self-management refers simply to the idea that the purpose of social organisations should be for the administration of things rather than the government of people. Obviously, it makes social organisation and cooperation possible, while at the same time making possible the highest possible amount of individual freedom. It is the foundation for the day-to-day functioning of Libertarian Communist society, or, in the best sense of the word, Anarchy.

Rudolf Rocker was one of the most popular voices in the anarcho-syndicalist movement. He outlined a view of the origins of the movement, what is sought, and why it was important to future of labour in his 1938 pamphlet “Anarchosyndicalism”. Although more frequently associated with labor struggles of the early twentieth century (particularly in France and Spain), many syndicalist organizations are active today.

The anarchist historian Rudolph Rocker, who presents a systematic conception of the development of anarchist thought towards anarchosyndicalism, along lines that bear comparison to Guérins work, puts the matter well when he writes that anarchism is not a fixed, self-enclosed social system but rather a definite trend in the historic development of mankind, which, in contrast with the intellectual guardianship of all clerical and governmental institutions, strives for the free unhindered unfolding of all the individual and social forces in life. Even freedom is only a relative, not an absolute concept, since it tends constantly to become broader and to affect wider circles in more manifold ways.