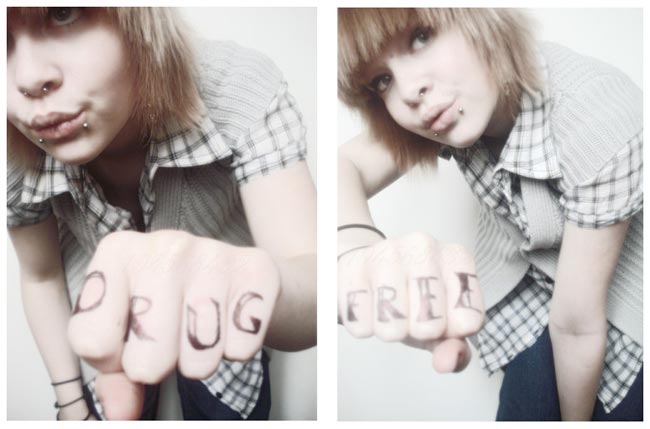 In the 1990s and 2000s, young girls’ role models in pop music. Mass media continually markets the Midriff, a stereotypical thin, scantily clad, sexually provocative woman seemingly in charge of her sexuality, but often reduced to little more than a narrow caricature of femininity. Just as Straight Edge men contrast themselves to other men, Straight Edge girls construct an identity in opposition to their images of other girls, especially stressing an independence from men.
Female Straight Edgers, particularly the younger ones, define themselves in opposition not only to youth who drink alcohol and use drugs but also to mainstream girls in general. As I mentioned previously, Straight Edge girls feel they have many advantages over their non-Straight Edge peers and this feeling gives some of them a relatively negative view of young women.

The general Straight Edge girls belief holds that “mainstream” girls are flighty, shallow, and out to impress men in whatever way possible. Straight edge girls commonly believe that other “typical” girls drink, dress up, and put on feminine acts to attract guys. Rejecting alcohol also symbolizes rejecting the need for approval from men.

Even as Straight Edge girls try to step out of the femininity game, they are caught in a trap between the expectations of their subculture and the social pressures of being feminine. Being feminine also means being “not masculine,” just as being masculine by definition is “not feminine.” Straight edge girls have to walk the fine line between being too feminine and not being feminine enough. Spending too much time on her appearance (doing her hair, wearing makeup, dressing stylishly) might cast an Straight Edge girls into the girly camp. However, a woman paying too little attention to her appearance risks being dismissed as well.

Even as Straight Edge girls defined themselves in contrast to “other” girls, there is often competition and mistrust among girls within the Straight Edge scene. Most girls in Straight Edge scene expressed some difficulty in forming a supportive network of female friends. Many had very strong friendships with one another, but they also noticed an underlying competition between women.
Despite the barriers Straight Edge girls encounter, the adversity they experience sometimes unites them in very strong friendships. Just as they resist mainstream femininity, they also resist the masculine overtones in the scene. Some femaleStraight Edgers decide that girls must unite to carve out their own space in the scene and that, while the men have good intentions of overcoming sexism, equality will only emerge when women stand up for themselves.

Like many contemporary young people, both men and women, Straight Edgers are generally cautious about, and sometimes suspicious of, feminism. While a few, particularly a few men, dismiss feminism entirely, most wrestle with the stereotypes spread by feminist opponents: feminist women are obnoxious, man-hating lesbians. Though few traight Edgers accept these stereotypes completely, the taint nevertheless remains. Still, virtually all traight Straight Edgers support the goals of liberal feminism (such as equal rights, equal pay, and questioning traditional gender roles) and some traight Edgers (including some men, as the last chapter revealed) self-identify as feminists, blending this identity with Straight Edge.

Straight edge girls who have developed some sort of feminist consciousness are particularly critical of the hypermasculinity, sexism, and machismo displayed by some men at hardcore shows. Though sexism and homophobia in the scene are glaringly obvious to some Straight Edge girls, a minority cannot understand what all the fuss is about. These women, while noticing the general lack of girls in bands and on the dance floor, put the responsibility squarely on the shoulders of women themselves. They feel that girls have every opportunity to become involved in the Straight Edge scene, but lack men’s motivation.

Straight edge girls simultaneously hold conflicting opinions of the Straight edge hardcore scene. Every Straight edge girl feel empowered with greater control over their personal lives, femininity, and sexuality. Nearly every woman, however, also pointed out the gross contradictions between the movement’s “positive” and antisexist ideals and the behavior of a few of its members. They overwhelmingly appreciate the pro feminist and “positive” men in the scene but are disgusted by the hyper masculine tough guys. To say that Straight edge ultimately “empowers” or “disempowers” young women would be an oversimplification—their experiences varied greatly and each woman has good and bad things to report. Straight edgers in general define themselves against mainstream youth, but this opposition has additional, gendered meanings. Straight edge men resist proving their masculinity through alcohol, drugs, and sexual conquest. Straight edge girls refuse to prove their femininity by impressing men. Clearly, such resistance produces mixed results, for both men and women.