Since the early 1990s, but especially since the mid-1990s, the number of rightwing skinheads has increased appreciably, especially in eastern Germany, Berlin, and Hamburg. In late 1992, the Ministry of the Interior estimated that there were about 6,500 skinheads, of whom 4,500 were rightist, in Germany. An astonishingly high number of 3,000 lived in eastern Germany. By 1997, the figure rose gradually to 7,000 skinheads, of whom some had already joined the right-wing scene in the GDR era prior to 1990.39 By 2003, the number of skinheads had risen to 10,000, but figures fluctuate constantly and are based on police estimates that often seem on the low side. The German sections of Blood and Honor, whose international headquarters are located in the United States, and of Hammer Skinheads, which originated in Great Britain, were the most active in Germany. They have propagated the superiority of the white Aryan race and called on “patriots” to be ready to fight the enemy. The Blood and Honor groups, with a membership of about 300, formed anti-anti-fascist cells to battle ultra-leftist anti-fascist groups. The latter have often marched in demonstrations against skinheads and neo-Nazis, and are ready to fight the rightists and the police. In turn, some skinhead groups have resorted to armed and terrorist underground activities. A number of western German skinheads, who had moved to eastern Germany after 1990 because it represented less of a decadentWestern culture and more of an authoritarian culture, moved back west after witnessing the brutal skinhead attacks on their foes.

In September 2000, the Federal Ministry of the Interior outlawed Blood and Honor and its White Youth division as a result of the skinhead violence. Individual members remained active in the skinhead movement and maintained ties with the NPD. However, the nationalist and racist Hammer Skinheads, with about 120 members, as well as a skinhead group Furchtlos und Treu (“Fearless and True”), with several Länder branches, were allowed to operate.
Occasionally regional skinhead groups have been formed.
In September 1995, the Bavarian Skinheads Allgäu was founded only to be banned in July 1996 by the Bavarian Ministry of the Interior for its violent activities. Other skinhead groups include the Deutsche Alternative (DA), which initially began as a neo-Nazi group (see above). Its leader Frank Hübner also became active in the skinhead scene, soon becoming one of the movement’s chiefs. The DA’s news-sheet, the Brandenburgische Beobachter (a name that
invokes comparison to the notorious Nazi newspaper Völkischer Beobachter), contained strident anti-Semitic materials. In 1992, Hübner pledged that his organization of about 700 members, led primarily by former GDR youth, would not engage in the violence so prevalent at the time.
One year earlier, in 1991, Dresden youth formed the German National Resistance after a west German skinhead leader, Rainer Sonntag, was killed in the city. He had declared his intention to close the sex shops and clubs that had opened in eastern German cities upon the GDR regime’s demise.
One of the most active skinhead groups was the Skinhead Saxonian Switzerland (SSS), named after an eastern German tourist region near Dresden known for its beautiful landscape. The group was founded in 1996 in the aftermath of the ban on the Viking Youth. 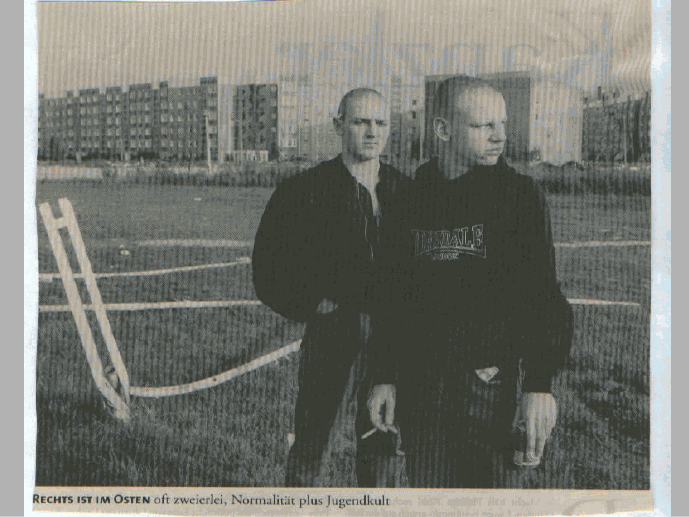 Many German skinheads receive moral support from their parents and grandparents, some of whom were World War Two veterans. The older generation talks little about the Nazi era, knowing that the vast majority of them were guilty of collaborating with the Hitler regime. But this guilt is not voiced openly. Instead the skinheads see it as their mission to continue, in their view, a fine tradition in which in effect they rehabilitate their elderly family members, who in turn approve of their offspring’s brutal actions. Such views are accompanied by an ethnic-cultural and a racist Aryan superiority, mixed in with Germanic-pagan elements.

Although most German skinheads still wear their typical bomber jackets and menacing Doc Marten boots as a way to raise their self-esteem and to suggest power and authority, the modern skinheads tend to blend into the crowd in large urban areas in their chic sports clothes and adoption of the latest cultural trends. Yet skinheads, often using symbols and codes, tend to recognize each other, especially if some of them wear winter jackets made by the Norwegian manufacturer Helly Hansen, whose initials HH are identical with the Heil Hitler salute. Another favorite is a British-made Lonsdale sweatshirt. German skinheads put open bomber jackets over the shirts, making sure that only the NS of Lo“ns”dale is visible, which in their imagination stands for “National Socialism,” or the letters NSDA (Lo “nsda” le), which stands for “National Socialist GermanWorkers.” Regardless of their appearance, German skinheads have been intent on demonstrating their power and authority, and their willingness to attack. The German Thor Steinar Company fashion label is on sweatshirts, sweaters and baseball hats that are popular among right-wing teenagers, especially in eastern Germany. The company logo shows an arrow bisected by a lightning flash, symbols of nationalism and force.