Graffiti writers, subcultural graffiti or graffiti subculture is just over 30 years old. Originally from New York, it has evolved synergistically with hip hop’s dance and music cultures and now enjoys status as a global phenomenon. 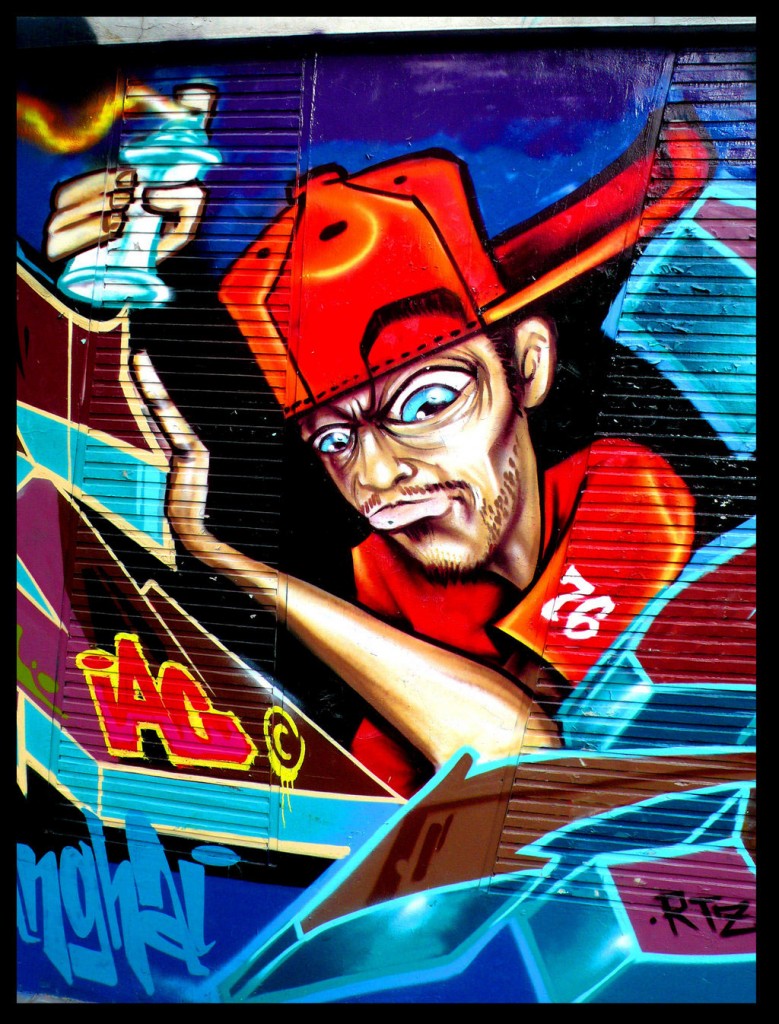 The graffiti subculture has its own status structure, its own criteria for placing individuals on this and its own symbolic, but highly valued, rewards. What differentiates it from many other youth groups or subcultures is its explicitness, its open recognition of its own point and purpose. Fame, respect and status are not naturally evolving by-products of this subculture, they are its sole reason for being, and a writer’s sole reason for being here.

Graffiti as a career

Graffiti writers are not particularly vocal about what they do, and the tabloid press, who comment more than most, rarely tell the whole story. Graffiti writer’s experience of this subculture is a highly structured one. Most follow an established route or career path if you like.

Just like an employee in a large company, graffiti writers start their careers at the bottom rung of this ladder and, through hard work, try to move up. The higher they rise, the greater the apparent rewards. Similarities aside, some important differences do indeed separate them:

– Graffiti writers are younger than most wage earners and their careers are considerably less enduring.
– Graffiti writers’ careers do not usually offer material gain: They are not being financially rewarded, their work is reward.

Fame and respect, there’s the two driving forces. Graffiti culture translates financial reward into symbolic capital, namely fame, recognition or, the respect of total
strangers. Symbolic or not, this is a highly valued wage in graffiti culture. As writers earn fame and respect, their self-concepts begin to change. At the beginning, when graffiti writers start off doing graffiti they are more or less like a nobody and they just work their way up to be someone. In this light, a writer’s career might be better
described as a moral career. If moral careers can be defined as available structures in a youth culture for the establishment of self, then graffiti represents a moral career in its purest form. Gaining respect, fame and a strong self-concept is openly expressed as a graffiti writer’s primary objective and the subculture is fully set up to support this goal.

Writers face the same arduous climb up the career ladder as any individual who wants success. The only difference is they probably put in a lot more overtime. A graffiti career is no nine to five vocation.

Graffiti involves the public inscription of one’s name or ‘tag’ : Each graffiti writer had his own tag, kind of like a logo in advertising. These names, ‘tags’ are visible like advertising written on the walls of your road/block or perhaps lining the street or tube/subway route you take to get to school everyday. It is this repeated exposure which seems to inspire a new graffiti writer’s interest. Rather than blend into the background, names pop out and become familiar. In recognizing these names, new graffiti writers begin to recognize the point of the subculture – fame. They are also presented with an element of challenge. The graffiti-covered walls and surfaces of the city act as a form of subcultural advertisement. They tell a new graffiti writer what can be achieved with a little time, effort and commitment and they provide a guideline for these goals.

Having developed an interest, graffiti writers must now decide upon the name or ‘tag’ they plan to use. The name is the basis of graffiti culture. It is the most important
aspect of a graffiti writer’s work and the source of their fame and respect. Graffiti is illegal so writers do not usually use their real-life names. A new name also provides them with a new start and another identity. Writers choose their names on the basis of a whole range of reasons. Every writer will try to find and keep an original name and claims of ownership are not uncommon. While most writers have one main name, highly ‘active’ illegal writers with a high police profile might ‘have another name, so if one name was hot, wanted by the authorities, they write under another name.

Illegal graffiti involves a celebration of the self. An individual graffiti writes his/her name and effectively says ‘I am’, ‘I exist’. In graffiti culture, however, it is not enough simply to ‘be’, to ‘exist’. One must be and exist stylishly. Style is a centrally important part of graffiti. The way you write your name, the letters you use, their shape, flow and form, the colours you choose, all these things go into making a writer’s ‘style’. And other writers will judge you, often harshly, on this basis. By developing skills slowly, graffiti writers avoid the risk of peer criticism. In effect, they negotiates one of the ‘hazards’ that make up a ‘moral career’. These are basically occasions ‘on which an individual can gain the respect or risk the contempt of his fellows’. An ego is at stake here and new graffiti writers are not taking any chances. Most will start by practising their skills on paper at home.

Although some older graffiti writers work legally doing gallery or paid commission work, the majority start and sustain illegal careers. Illegality is a natural starting point for a new graffiti writer. First of all their interest in graffiti is usually inspired by seeing other illegal writers’ work. Second, the adventure, excitement and release of the illegal exercise play a large part in initially captivating their attention. 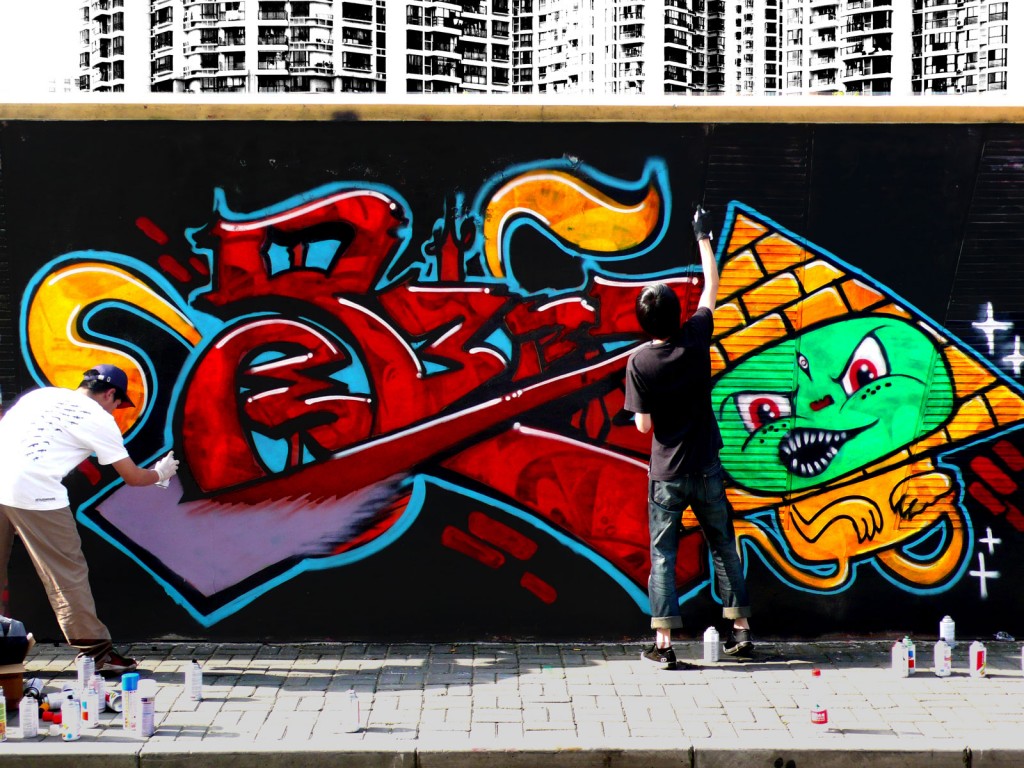 Claiming fame is referred to as ‘making a name’ and there are three main graffiti forms that graffiti writers can use to do this; the tag, the throw up and the piece. These are all variations of the name and, at a basic level, involve one of two activities – a stylistic or a prolific inscription of this word. Writers can adopt these different graffiti forms, and with this, different paths to prominence, but their careers tend to follow a fairly standard pattern: Usually every graffiti writer starts off on paper, works their way to paint and bombing and then works their way to doing pieces and they get better as they go on. Following the practice of their skills on paper, graffiti writers generally start by ‘tagging’ or ‘bombing’, that is signing their name like a signature. Tagging is the easiest place to start. As a graffiti writer progresses, he/she will probably start to experiment and ‘get up’ using other forms of graffiti.

A graffiti writer with the experience, skill and desire to meet greater challenges will probably graduate his/her career to more sedate levels as a piecer. Piece, short for masterpiece, is a larger, more elaborate, colourful and stylistically demanding depiction of the writer’s name. Piecers are dealing with more complex and time-consuming designs, so their work is assessed for its quality rather than quantity. At this point ‘style’ comes into play as a central component of a writer’s work. As writers move on and search for new ways to push and extend themselves, tagging fades into the background a little. It may still be used to preserve the writer’s profile, but it loses its place as a vocation.

To earn fame graffiti writers need an audience. Accordingly, the places where they paint are usually highly visible. Spots like highways, overpasses, bridges, street and traintrack walls do a good job of putting graffiti writers’ work in the public eye. However, the best canvas for their work is one that moves, extending their audience and the reach of their name. Buses and trucks are a popular target for graffiti. The ultimate vehicle, though, will always be the subway/underground trains.

When a graffiti writer reaches higher levels of the subculture’s status hierarchy, the pace of his/her career starts to settle. By moving through the subculture’s recognized stages of activity, writers can make justified changes to their identities. This flexibility allows them to negotiate the difficulties of their illegal position and, indeed, avoid them when they become too much.

At a certain age or life stage, graffiti writers may find themselves at a crossroads. On one side they have ‘real life’ responsibilities which start to demand more of their time, money and attention. On the other, they have an illegal pursuit which they cherish, but cannot harmonize with their present lifestyle. Commercial legal work moves writers out of the boundaries of the subculture. They no longer paint for their peers or themselves, they have a new audience now; the person or business buying their work.