Straight Edge refers to a subculture of hardcore punk which was a direct reaction to the sexual revolution, hedonism, and excess associated with punk rock. Since the late 1970s, straight edge has been a part of the punk scene. During that time, a wide variety of beliefs and ideas have been incorporated into straight edge including vegetarianism, animal rights, communism. In many parts of the United States, straight edge is treated as a gang; however, recent studies suggest that only a small minority of the people who refer to themselves as straight edge are violent.

The “X,” Straight Edge’s universal symbol, emerged in the early 1980s, when music club owners marked the hands of underage concert-goers with X’s to ensure that bartenders would not serve them alcohol. Soon the kids intentionally marked their own hands, both to signal club workers of their intentions not to drink and, more importantly, to make a statement of pride and defiance out of not drinking. The movement appropriated the X, a symbol meant to be negative, transforming its meaning into discipline and commitment to a drug-free lifestyle. Youth wear X’s on their backpacks, shirts, and necklaces; they tattoo them on their bodies; and draw them on their school folders, skateboards, cars and other possessions. The X unites youth around the world, communicating a common set of values and experiences. Straight edgers find strength, camaraderie, loyalty, and encouragement in their sXe friends, valuing them above all else.

Throughout Straight Edge history, trends in the movement have come and gone almost as quickly as have Straight Edgers. Identifying a core set of principles that spans time and geography is difficult because values change, each scene has its own flavor, and even individuals within the same scene have different interpretations of Straight Edge. Straight edgers recognize that Straight Edge means something different to each person, assuming the identity and, as with any group, individual members’ level of dedication varies. However, while individuals are free to follow the philosophy in various ways, often adding their own interpretations, there is a set of fundamental values that underlays much of the Straight Edge movement: positivity/clean living, lifetime commitment to the movement and its values, reserving sex for caring relationships, self actualization, spreading the subculture’s message, and involvement in progressive causes.

T-shirt slogans, song lyrics, tattoos, and other symbols constantly remind Straight Edgers of their mission and dedication: “It’s OK Not to Drink,”
“True Till Death,” and “One Life Drug Free” are among the more popular messages.

Clean living
The foundation underlying the sXe identity is positive, clean living. Straight edge is fundamentally about subverting the drug scene and creating an alternative, drug-free environment. Clean living is the key precursor to a positive life. Many sXers even shun caffeine and medicinal drugs, and a majority are committed vegetarians or vegans.
Refusing drugs and alcohol has a variety of meanings for individual Straight Edgers, including purification, control, and breaking abusive family patterns. Purification literally means being free from toxins that threaten one’s health and potentially ruin lives. The movement provides young people with a way to feel more in control of their lives. Many youth experience peer pressure to drink alcohol, smoke cigarettes, or try illegal drugs. For some, this pressure creates feelings of helplessness and lack of control; acceptance often hinges on substance use. Straight edgers report that the group gives them a way to feel accepted without using and helps them maintain control over their personal situations.

Lifetime commitment
Straight edgers make a lifetime commitment to positive, clean living. They treat their abstinence and adoption of the Straight Edge identity as a sacred vow, calling it an oath, pledge, or promise. When formerly Straight Edge individuals began drinking, smoking, or using drugs, adherents claim they had sold out or lost the edge.

Caring relationships
Reserving sex for caring relationships is an extension of the positive, clean lifestyle. Many sXers view casual sex as yet another pitfall of dominant society, their counterparts in other youth subcultures, and their more mainstream peers. It carries the possibility of sexually transmitted diseases and feelings of degradation and shame.

Self actualization
Straight Edgers claim that resisting social standards and expectations allows them to follow their own, more meaningful, path in life, toward greater self-actualization. Straight Edgers believe that as children we have incredible potential that is “slowly crushed and destroyed by a standardized society and mechanical teaching”. Straight Edgers construct a view of the world as mediocre and unfulfilling, but they also believe that society encourages people to medicate themselves with crutches such as drugs, alcohol, and sex to forget their unhappiness.

Spreading the message
Straight edge resistance transcends members’ simple abstinence. Straight Edgers often actively encourage other young people to become drug and alcohol free. many sXers undertake a mission to convince their peers that resisting drugs, rather than using them, will help create a better world. A minority of Straight edgers, labeled militant or hard-line by other sXers, are very outspoken, donning X’s and sXe messages at nearly all times and confronting their peers who use drugs.

Involvement in progressive causes
Like members of other subcultures, Straight edgers often become involved in a variety of social causes. Many viewed their involvement in social change as a logical progression from clean living that led them to embrace progressive concerns and become directly involved at some level. Clean living and positivity lead to clear thinking, which in turn create a desire to resist and self-actualize. This entire process opens them up to the world’s problems and their concerns grow. 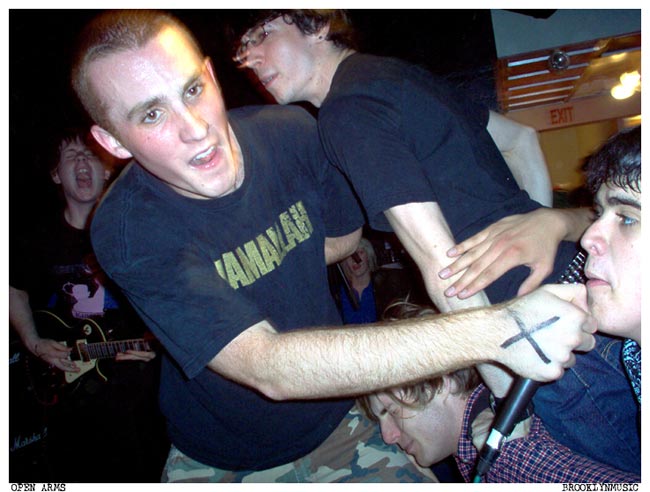 Straight Edge is more to many adherents than just music, more than posing at a show: yet determining just what sXe is beyond the style and music is difficult. Straight edgers are a very diverse group whose members interpret and live the movement’s core values in a multitude of ways. In many ways, subcultures are individualistic, heterogeneous entities.

Social movements are typically distinguished from subcultures by their more formal structure, lesser emphasis on style, and focus on political change. Movements are organized, last for a specific period of time, and typically work for change from outside the political system.

The sXe movement has no headquarters, holds no meetings, and keeps no membership list. There is no charter, mission statement, newsletter, or formal set of rules. The movement recognizes no leaders, collects no dues, gathers few resources, and rarely challenges institutionalized politics. Yet sXers around the world agree on a set of fundamental principles of the movement and act accordingly. The core values of clean living, positive attitude, resistance to social pressures, and community transcend national boundaries, despite Straight Edge’s complete lack of bureaucracy. At the heart of sXe, punk rock, and many other youth cultures is a quest for individuality and individual expression. Members define themselves against a mainstream society which enforces conformity, crushing individual thought and action. Straight edgers do not “participate” in the movement in ways scholars typically think of movement participation: strikes, picketing, signing petitions, lobbying, writing letters, joining and/or maintaining an activist organization, civil disobedience, and other common avenues of social protest. Bound loosely by a guiding collective identity and united in their
commitment, sXers customize their participation to meet their own interests and needs. Commitment to a meaningful identity is fundamental to a variety of forms of participation.