Suedehead is a member of a late 1960s youth fashion and gang movement, characterised by a close-cropped scalp and smart utilitarian wear, associated with football hooliganism, racist violence and neo-Nazism. This lexicographic development matches exactly the SKINHEAD fashion’s further growth; ‘suede’ is the velvety surface of leather and thus describes the soft nap on a previously shaven head.
– Suedehead definition by: The Concise New Partridge Dictionary of Slang

The problem with Suedeheads is that they were never a defined subculture, they are basically skinhead going back to mod a little. By the early 1970s, skinhead culture began to mutate into the variant ‘white ethnic’ styles of the suedeheads and smooths. Suedes really just a smarter dressed skinhead. Anyone know those skins that go the extra yard to get those loafers, those $60+ shirts, everything tailored, color coordinated socks, a tonic suit? Those are suedeheads. The hair thing isn’t a big deal, skinheads back in 69′ didn’t all have buzzed heads. 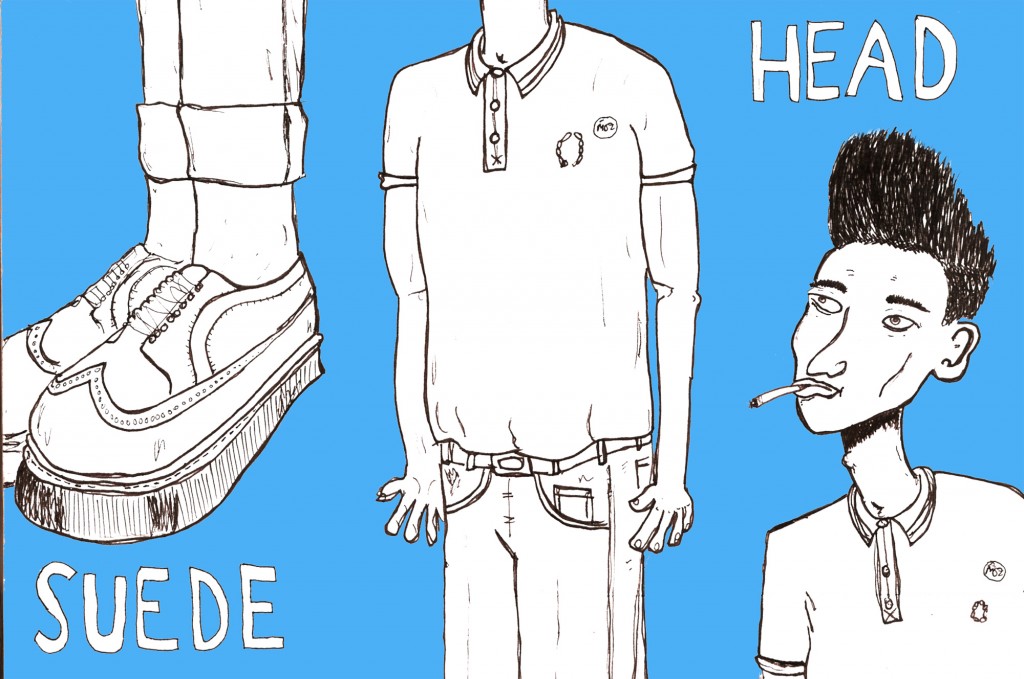 Although often working class like skinheads, some suedeheads had white collar jobs. Suedeheads wore brogues, loafers or basketweave Norwegians instead of heavy boots. Suedeheads wore suits and other dressy outfits as everyday wear instead of just at dancehalls. Crombie-style overcoats and sheepskin coats became common. Shirts often had large button-down collars. The most common style was a large windowpane check worn under a tank top (known as a sweater vest in North America). Sta-Prest trousers became worn more than jeans, which had been common with skinheads. Another characteristic was coloured socks — such as solid red or blue — instead of plain black or white.
Suedeheads shared the skinheads’ interest in reggae, soul music and ska, but slower and more soulful. Some suedeheads also listened to British glam rock bands, such as The Sweet, Slade and Mott the Hoople.