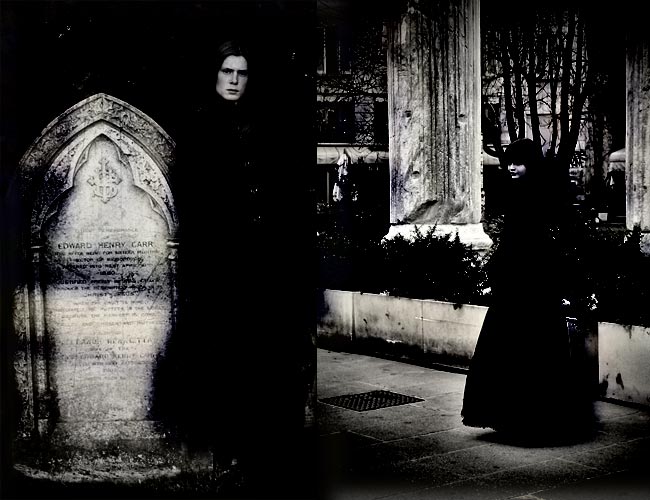 Prior to and during the first half of the 1980s, certain mostly British-based sounds and images of the immediate post-punk climate became crystallized into an identifiable movement. While various factors were involved, there is little doubt that music and its performers were most directly responsible for the emergence of the stylistic characteristics of gothic culture.

The most important starting point of gothic culture was probably provided by the images and sounds of Bauhaus – notably the single, ‘Bela Lugosi’s Dead’, released in 1979. The performance of this song, and indeed much of the band’s set, contained most of the distinctive themes which still pervade the goth subculture, from macabre funereal musical tone and tempo, to lyrical references to the undead, to deep voiced eerie vocals, to a dark twisted form of androgyny in the appearance of the band and most of its following. In the period following these early signs, a cluster of emerging bands, many of whom played gigs alongside one another from time to time, found themselves placed by the music press into a scene temporarily labelled postor sometimes positive-punk and, eventually, goth. In addition to the continual relatively high-profile presence of Siouxsie and the Banshees and their acquaintances The Cure, the most important acts included Bauhaus, Southern Death Cult (later known as Death Cult and finally as The Cult), Play Dead, The Birthday Party, Alien Sex Fiend, U.K. Decay, Sex Gang Children, Virgin Prunes and Specimen. From 1982, the last of these were heavily involved in a London-based nightclub known as The Batcave, which ended up acting as an initial melting pot for many of the bands and fans associated with the fledgling style. Most notable, perhaps, was the further development and establishment among performers and their following of variants of the dark femininity pioneered by Bauhaus and Siouxsie and the Banshees. A particularly important and lasting addition to the style was Specimen’s use of ripped fishnet and other see-through fabrics, in the form of tops as well as tights. The club also acted as a magnet for the music press, keen in the wake of punk to find, report and, ultimately, construct any possible successors. It would appear that the term ‘goth’ was mentioned in passing by a number of those involved, including Tony Wilson, producer of Joy Division and members of both Southern Death Cult and U.K. Decay.

As the music and style spread across and beyond Britain via the music press, radio and occasional television performances, record distribution and live tours, more and more nightclubs accommodated the numerous teenagers adopting the sounds and styles of what was soon to become widely known as the goth culture.
Toward the mid-1980s a Leeds band called The Sisters of Mercy, who had come together in 1981, began to emerge as the most high profile and, indeed, influential band associated with gothic culture. While their visual image was stylistically less extreme and innovative than that of the likes of Specimen or Alien Sex Fiend, it had the effect of solidifying many of the themes of goth culture in its heyday – notably the dark hair, pointed boots, tight black jeans and shades often worn by members of the band. Radio, press and television coverage graced not only the Sisters of Mercy, but the band’s acrimonious offshoot The Mission, as well as Fields of the Nephilim, All About Eve and The Cult. An equally high profile was afforded to continual new material from the veritable veterans, Siouxsie and the Banshees and The Cure.

By the mid-1990s, however, the gothic culture had seemingly used up its time in the media and commercial spotlight and all but disappeared from public view. The intense attachment of many participants to the style of the goth subculture, though, ensured its small-scale survival. From across and beyond Britain there emerged a new generation of bands who were reliant upon small-scale specialist labels, media and clubs, and who were motivated more by their own enthusiasm than by any realistic hope of breaking into public view or making significant money.

The gothic subculture revolved around a general emphasis on artefacts, appearances and music deemed suitably dark, sombre and, sometimes, macabre. Most obvious and important, was an overwhelming and consistent emphasis on the colour black, whether in terms of clothing, hair, lipstick, household decoration or even pet cats. In terms of personal appearance, the theme was also implicit in a tendency for many goths to wear white foundation on their faces to offset thick, usually extended black eyeliner, cheekbone accentuating blusher and dark lipstick, all of which can be traced right back to a number of the early 1980s bands. Goths also tended to expect their pubs or clubs to be particularly darkened, often with stage smoke for added atmosphere.

While significant numbers of early elements, were evidently alive and well, the general theme of the sombre and the macabre had also developed in various ways. Fashions emerged, within the scene, for items which were relatively marginal to the style of the original generation but nevertheless consistent with the general themes their images and sounds were associated with. For example, once the general goth theme had been established for a time, many elaborated on its logical association with horror by drawing upon various images originating in macabre fiction such as crucifixes, bats and vampires sometimes in a tongue – in – cheek self-conscious manner, sometimes not. At times, such progressions were linked to the clear and direct influence of media products. The profile of vampire and horror fiction, for example, was raised particularly high in the early 1990s by Hollywood films such as Bram Stoker’s Dracula and Interview with the Vampire. The appearance of the vampire protagonists in such films reinforced the existing enthusiasm among goth males for whitened faces, long dark hair and shades. Meanwhile, for females, the general representations of elements of eighteenth- and nineteenth-century fashion in such fiction further encouraged the adoption of certain styles of clothing associated with the gothic revival of those times and with the Victorian period which followed it.

As well as manifesting itself in a greater variety of ways compared with practice in the early 1980s, there were also, by the late 1990s, more obvious transgressions of the emphasis on dark imagery than there had been in the 1980s. Most notably, although black remained predominant, brighter colours had clearly become more acceptable in terms of hair, clothing and make-up. What began as a somewhat humorous and deliberate transgression by certain individuals had resulted in the growing translocal acceptance of the previously detested colour pink, as a complement to black, among goths in Britain.

Alongside punks, indie fans, crusties and others, during the 1980s and also the early 1990s goths often regarded their grouping to be one of the specific taste formations under this umbrella. While the use of this term and the physical association of goths with punks, crusties and indie rock fans was rather less common, selected music and artefacts associated with the latter had been retained by the gothic culture. A liking for certain bands or songs associated with indie, punk and crusty scenes was also fairly common among goths. Importantly, in both appearance and music tastes, only certain ‘external’ elements were visible, and these tended to take their place alongside more distinctive subcultural tastes. There were also overlaps with rock culture more generally, in that many goths wore T-shirts of their favourite bands which, while containing subculturally distinctive bands and designs, resembled those worn by rock fans of varying stylistic persuasions. Due to certain stylistic crossovers toward the late 1990s, there was also an increasing, though not unanimous, acceptance in the gothic culture of limited examples of music associated with extreme or death metal. While far more aggressive, masculine and thrash guitar-based on the whole, these genres had by then taken on some of the features of goth culture – particularly the prominence of black hair and clothes, and the wearing of horror-style make-up.