What is a Teddy Boy

Teddy Boy; Teddy; Ted: noun;
A member of a youth cult of the mid to late 1950s, characterised by a style of dress loosely inspired by fashions of the Edwardian era (1901–10). Edward abbreviates to Teddy and Ted.
Teddy boys referred to themselves as Teds.
– Teddy Boy definition by The Concise New Partridge Dictionary of Slang and Unconventional English 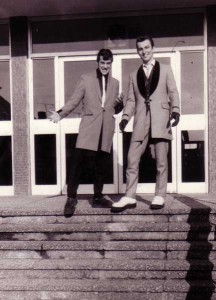 Teddy Boys date back to the late 1940s and early 1950s, when, following the war, a generation of youngsters with money to burn appropriated Edwardian (Teddy) clothing style currently in fashion on Saville Row and cranked it uo a notch. In the beginning there were drapes and drainpipe trousers. Then that look was customised; the drapes with collar, cuff and pocket trimmings, even narrower trousers, crepe soled shoes or beetle crushers and hairstyle heavily greased into a quiff and shaped into DA, or as it was popularly called, a ducks arse as it resembled one. It has been widely acknowledged that in Britain, Teddy Boys were the first group whose style was self-created.

Teddy Boys were the first real high profile rebel teenagers, who flaunted their clothes and attitude like a badge, It comes as no surprise then that the media was quick to paint them as a menace and violent based on a single incident. When teenager John Beckley was murdered in july 1953 by Teddy Boys, the Daily Mirror’s headline ” Flick Knives, Dance Music and Edwardian Suits’ linked criminality to clothes. More tales of teenage violence followed, luridly reported and no doubt exaggerated in press.

In June 1955 the Sunday Dispatch headline was a typically sensationalist tabloid style with following headline:
” WAR ON TEDDY BOYS – Menace in the streets of Britain’s cities is being cleaned up at last ”

The Teddy Boys (and Girls) are seen as the spiritual ancestors of both the Mods and the Rockers.

In essence, the Teds were never more than a minority in their age group but they were the first to see themselves and to be seen by society as teenagers, the bad guys, and so a group apart. They also pre-dated, but came to be associated with rock ‘n’ roll which of course itself became fresh fodder for the media offering more sex, drugs and violence stories. Twenty five years down due the line 1977 Teddy Boys had never had quite died out and there was a revival due to resurgence of interest in rock ‘n’ roll, also there was a resurgence of interest in Teddy Boy fashions. The look was promoted by Vivienne Westwood and Malcolm McLaren through their shop Let it Rock, on London’s King’s Road. This new generation of Teds adopted some aspects of the 1950s but with a large glam rock influence, including louder colours for drape jackets, brothel creepers and socks, and shiny satin shirts worn with bootlace ties, jeans and big-buckled belts. Additionally, they were more likely to use hairspray than grease to style their hair.
In the main, Teddy Boys were a rigidly conservative and traditional and being a Teddy Boy often ran in the family. The Important difference though between the Teddy Boys 1950s and Teddy Boys 1970s was, though the clothes and music may have stayed fundamentally the same, violence was more prevalent.

How did Teddy Boys come to clash with Punks?

When you look at the two youth groups you see it was inevitable. In the 1977 these New Teddy Boys were younger and out to make a name for themselves. What better way to prove their youth credentials and the fact they were still around than the age old one of finding a more high profile enemy and beating it to a pulp? First Mods and Rockers; now Teddy boys and Punks.

Plain old jealousy was one more reason for clash with Punks. Media gave all publicity to Punks as the new gang in town. In 70s Teddy boys had been undergoing a huge revival amongst younger folks yet never got much any press and very little radio exposure. The famous Teddy Boys march in London when thousands of Teddy Boys marched on the BBC from all over UK demanding the BBC to play some Real rock ‘n’ roll. In contrast if everything that Punks do it was a front page news. Violence meant more publicity and a higher Teddy Boy profile, which meant more teenagers became attracted to becoming Teddy Boys.

The irony of it all was that despite their differences, there were a lot of similarities between Teddy Boys and Punks. Both were devoted to their music and clothing that identified as separate from a society they saw as dull and pedestrian. Both were vilified and demonised in the press as teenagers full of destruction and attitude and a menace to society.

In the late 1980s, there was a move by a number of Teddy Boys to re-capture the original 1950s Teddy Boy style. This led to the formation of a group known as The Edwardian Drape Society (T.E.D.S) in the early 1990s. T.E.D.S. was then based in the Tottenham area of north London, and the group concentrated on reclaiming the style which they felt had become bastardised by pop/glam rock bands. In 2007, The Edwardian Teddy Boy Association was formed and has continued the work of reclaiming the original style, and works towards to uniting all drape-wearing Teddy Boys who wish to emulate the original 1950s style. Most Teddy Boys nowadays wear a much more conservative form of Edwardian dress than that worn in the 1970s, and this more authentic dress code emulates the original 1950s image.