New Romantics also known as New Wavers, Blitz Kids was a youth fashion and music movement in the UK that flourished in 1980s. Just don’t call them ’80 One-Hit wonders. Developing in London nightclubs such as Billy’s and The Blitz and spreading to other major cities in the UK, it was associated with bands including Japan, Ultravox, Visage, Soft Cell, Duran Duran, Spandau Ballet, ABC and Culture Club.

Who are the New Romantics 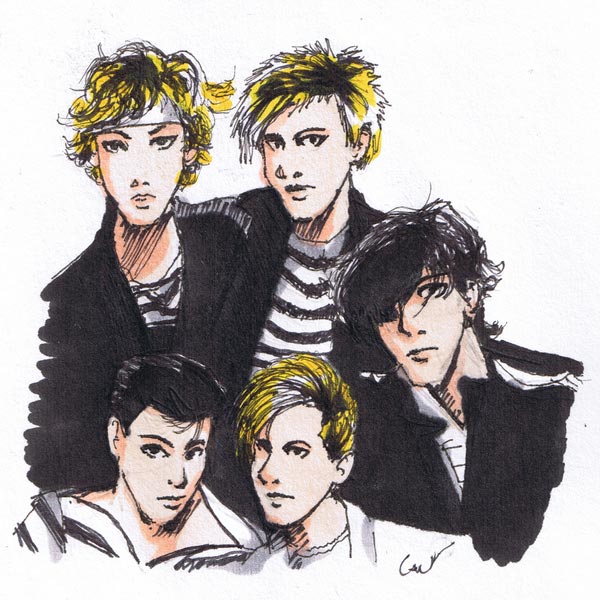 Devotees and performers of an early 1980s music trend out of England. The New Romantics sound was upbeat synthesizer pop, engineered for dancing and the top 10 hit list. New Romanticism can be seen as a reaction to punk, and a revival of the glam rock of the early 1970s.
The musical dawn of the 1980s saw Disco in its death throes, with fans and critics eager for the Next Big Thing: it came in the form of a “Second British Invasion” accelerated by a new medium called MTV. New Romantic bands who took most advantage of the music video form achieved the biggest success: Duran Duran’s record sales are neck-and-neck with likes of music legend Bob Dylan at 70million albums and singles worldwide.
But as music trends go, New Wave was short-lived, dying out mid-decade as the airwaves were dominated by Bruce Springsteen, Madonna, The Police and U2. The New Romantics fashion sense borrowed heavily from the androgyny of David Bowie and the feathered look of glam rockers such as Roxy Music and New Rock Dolls. Today, it’s seen as virtually synonymous with “the ’80s look”: angular shapes, pastel and neon colors, dashing, daring, and all dolled up. New Romantics (New wavers) maintain a strong appeal among the demographic designated in the early 1990s as “Generation X” (which was also the name of the band Billy Idol was in, prior to his solo success). Heroes of New Romantics are musical fashion plates David Bowie, Bryan Ferry, Boy George, Adam Ant.

The biggest controversy about New romantics is that they abetted the popular belief that “rock is dead” replacing skilled musicians with synthesized instuments and operators who pushed buttons. Biggest misconception is that New Romantics still have, and listen to New Wave music on the original vinyl.

Decline and revivals of New Romantics

Music journalist Dave Rimmer considered the peak of the movement was the Live Aid concert of July 1985, after which “everyone seemed to take hubristic tumbles”, and Simon Reynolds also notes the “Do They Know Its Christmas” single in late 1984 and Live Aid in 1985 as a turning points, with the movement seen as having become decadent, with “overripe arrangements and bloated videos” for songs like Duran Duran’s “Wild Boys” and Culture Club’s “War Song”. American reaction against European synthpop and “haircut bands” has been seen as beginning in the mid-1980s with the rise of heartland rock and roots rock. In the UK the arrival of indie rock bands, particularly The Smiths, has been seen as marking the end of synth-driven New Wave and the beginning of the guitar rock that would dominate rock into the 1990s. By the end of the 1980s many acts had been dropped by their labels and the solo careers of many New Romantic stars gradually faded. In the mid-1990s, New Romanticism was the subject of nostalgia-oriented club nights — such as the Human League inspired “Don’t You Want Me Baby”, and “Planet Earth”, a Duran Duran-themed night club whose promoter told The Sunday Times “It’s more of a celebration than a revival”. In the same period New Romanticism was also an inspiration for the short-lived romo musical movement.

List of New Romantic artists and people who have been important to or linked to the genre: