There are two parts in the anarcho-punk scene; one in the United Kingdom, and one mainly centered on the West Coast of the United States. Although these two factions can be seen as part of a whole in many respects, especially in the sound they produced or in the content of their lyrics and artwork, there are important differences between them.

The anarcho-punk scene developed around late 1977. It built upon the momentum surrounding the mainstream punk scene while at the same time reacting against the direction the mainstream was taking in its relationship with establishment society. The anarcho-punks viewed safety pins and Mohicans as little more than ineffectual fashion posturing stimulated by the mainstream media and industry. The subservience of mainstream artists is satirized in “Pull My Strings” by the Dead Kennedys: “Give me a toot, / I’ll sell you my soul. / Pull my strings and I’ll go far”. Artistic integrity, social and political commentary and actions, and personal responsibility became the scene’s central points, marking the anarcho- punks (as they would assert) as the opposite of what had come before under the name of punk. Whereas the Sex Pistols would proudly display bad manners and opportunism in their dealings with “the establishment,” the anarcho-punks kept clear of “the establishment” altogether, working in opposition to it instead, as will be shown. The outward character of the anarcho-punk scene did nevertheless build upon the roots of the mainstream punk that it was reacting to. The extreme rock ’n’ roll of earlier punk bands such as the Damned and the Buzzcocks was taken to new heights.

The anarcho-punks played faster and more chaotically than had been heard before. Production values were reduced to the lowest levels, a reflection of the budgets available under the DIY system, as well as a reaction against the values of commercial music. The sound was trashy, discordant, and very angry. 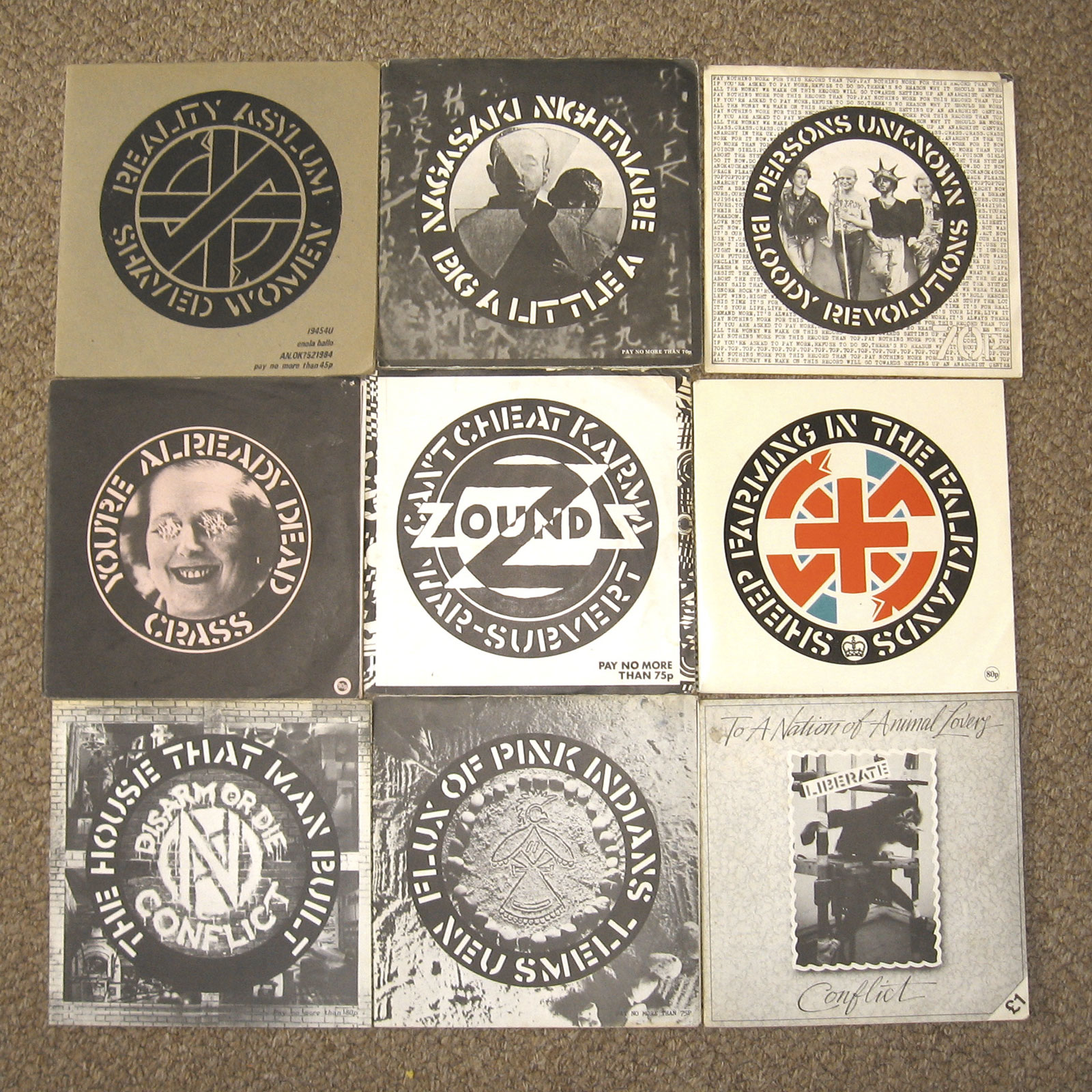 Lyrically, the anarcho-punks were informed by political and social commentary, often presenting a somewhat naïve understanding of issues such as poverty, war, or prejudice. The content of the songs presented allegories drawn from underground media and conspiracy theories or lampooned political and social mores. At times, the songs displayed a certain philosophical and sociological awareness, thus far rare in the world of rock but having antecedents in folk and protest songs. Live performances broke with many of the norms of conventional rock.

Concert billings were shared between many bands, as well as other performers such as poets, with the hierarchy between headliners and support acts either limited or completely scrapped. Often films were shown, and there would normally be some form of political or educational material distributed among, or by, the audience. “Promoters” tended to be anyone who arranged a space and got in touch with the bands to ask them to play. Hence a lot of gigs were played in garages, at parties, in community centers, and at free festivals. When gigs took place in “normal” venues, there was a huge amount of derision poured upon the principles and operations of the “professional” music world. This often took the form of vitriol against, or even pitched battles with, the bouncers or the management. Performances were loud and chaotic, often marred by technical problems, politically and “tribe”-motivated violence, and closures by the police. Overall, unity was primary, with as few of the trappings of showbiz as was possible.

While anarcho-punk bands have been often ideologically varied, most groups could be categorized has adhering to anarchism without adjectives, in that it embraces the syncretic fusion of many potentially differing ideological strains of anarchism. Some anarcho-punks identified with anarcha-feminists, while others were anarcho-syndicalists. Anarcho-punks universally believe in direct action, although the way in which this manifests itself varies greatly. Despite their differences in strategy, anarcho-punks often co-operate with each other. Many anarcho-punks are pacifists and therefore believe in using non-violent means of achieving their aims.