Anarchism is a political philosophy or group of doctrines and attitudes centered on rejection of any form of compulsory government (state) and supporting its elimination. Anarchism in its most general meaning, is the belief that all forms of rulership are undesirable and should be abolished. 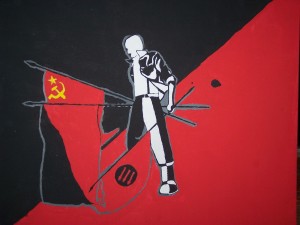 Anarchism, a very ecumenical body of anti-authoritarian ideas-developed in the tension between two basically contradictory tendencies: a personalistic commitment to individual autonomy and a collectivist commitment to social freedom. These tendencies have by no means been reconciled in the history of libertarian thought. Indeed, for much of the last century, they simply coexisted within anarchism as a minimalist credo of opposition to the State rather than as a maximalist credo that articulated the kind of new society that had to be created in its place. Which is not to say that various schools of anarchism did not
advocate very specific forms of social organization, albeit often markedly at variance with one another. Essentially, however, anarchism as a whole advanced what Isaiah Berlin has called “negative freedom,” that is to say, a formal “freedom from,” rather than a substantive “freedom to.” Indeed, anarchism often celebrated its commitment to negative freedom as evidence of its own pluralism, ideological tolerance, or creativity – or even, as more than one recent postmodernist celebrant has argued, its incoherence. Anarchism’s failure to resolve this tension, to articulate the relationship of the individual to the collective, and to enunciate the historical circumstances that would make possible a stateless anarchic society produced problems in anarchist thought that remain unresolved to this day.

“In broad terms, anarchism is the rejection of coercion and domination in all forms, including that of the priests and the plutocrats…. The anarchist…abominates all forms of authoritarianism, and he is the enemy of parasitism, exploitation, and oppression. The anarchist frees himself from all that is sacred and carries out a vast program of desecration.”
Definition of Anarchism by: Mark Mirabello. Handbook for Rebels and Outlaws. Oxford, England: Mandrake of Oxford

Despite their differences the proponents of anarchism generally tend to:
(1) affirm freedom as a basic value; some add other values as well, such as justice, equality, or human well-being;
(2) attack the state as inconsistent with freedom (and/or the other values); and
(3) propose a programme for building a better society without the state.

Most of the literature on anarchism considers the state an instrument of oppression, typically run by its leaders for their own benefit. Government is often, though not always, similarly attacked, as are exploitative owners of the means of production in a capitalistic system, despotic teachers, and over-dominant parents. By extension anarchists hold as unjustifiable any form of authoritarianism, which is the use of one’s position of power for one’s own benefit rather than for the benefit of those subject to authority. The anarchist emphasis on *freedom, *justice, and human *well-being springs from a positive view of human nature. Human beings are seen as for the most part capable of rationally governing themselves in a peaceful, co-operative, and productive manner.

The term anarchism and origins of anarchism

The term anarchism derives from the Greek ἄναρχος, anarchos, meaning “without rulers” “without archons”. There is some ambiguity with the use of the terms “libertarianism” and “libertarian” in writings about anarchism. Since the 1890s from France, the term “libertarianism” has often been used as a synonym for anarchism and was used almost exclusively in this sense until the 1950s in the United States; its use as a synonym is still common outside the United States.

Long before anarchism emerged as a distinct perspective, human beings lived for thousands of years in societies without government. It was only after the rise of hierarchical societies that anarchist ideas were formulated as a critical response to and rejection of coercive political institutions and hierarchical social relationships.

Anarchism in modern sense, has its roots in secular political thought of the Enlightenment, particularly Rousseau’s arguments for the moral centrality of freedom. The word anarchist was originally used as a term of abuse, but by the French Revolution some groups such as the Enrages has started to use the term in a positive sense. It was in this political climate that William Godwin would develop his philosophy, which is consider by many to be the first expression of modern thought. By the turn of the 19th century, the English word “anarchism” had lost its initial negative connotation.

According to Peter Kropotkin, William Godwin, in his Enquiry Concerning Political Justice (1973), was the first to formulate the political and economical conceptions of anarchism, even though he did not gave that name to ideas developed in his book. Strongly influenced by the sentiments of the French Revolution, Godwin argued that since man is a rational being he must not be hampered on the exercise of his pure reason. Since all forms of government have irrational foundations and are consequently tyrannical in nature, they must be swept away.

Pierre-Joseph Proudhon is first self-proclaimed anarchist, a label which he adopted in his 1840 treatise “What is Property?”. It is for this reason that some declare Proudhon the founder of modern anarchist theory. He developed the theory of spontaneous order in society, whereby organizations emerges without any central authority, a “positive anarchy” in which order arises from every individual doing what he wishes and only what he wishes, and where business transactions alone produces social order. He saw anarchism as a form of government in which public and private consciousness, formed through the development of science and law, is alone sufficient to maintain order and guarantee all liberties. In it, as a consequence, the institutions of the police, preventive and repressive methods, officialdom, taxation, etc., are reduced to a minimum.

Anarchism as a Social Movement

The anti-authoritarian sections of the First International were the precursors of the anarcho-syndicalists, seeking to “replace the privilege and authority of the State” with the “free and spontaneous organization of labor.” 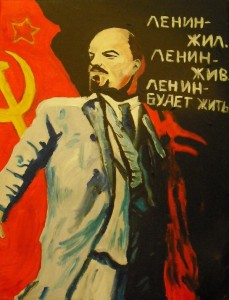 Anarchists participated alongside the Bolsheviks in both February and October revolutions, and were initially enthusiastic about the Bolshevik revolution. However, the Bolsheviks soon turned against the anarchists and other left-wing opposition, a conflict that culminated in the 1921 Kronstadt rebellion which the new government repressed. Anarchists in central Russia were either imprisoned, driven underground or joined the victorious Bolsheviks; the anarchists from Petrograd and Moscow fled to the Ukraine. There, in the Free Territory, they fought in the civil war against the Whites (a grouping of monarchists and other opponents of the October Revolution) and then the Bolsheviks as part of the Revolutionary Insurrectionary Army of Ukraine led by Nestor Makhno, who established an anarchist society in the region for a number of months.
Expelled American anarchists Emma Goldman and Alexander Berkman were amongst those agitating in response to Bolshevik policy and the suppression of the Kronstadt uprising, before they left Russia. Both wrote accounts of their experiences in Russia, criticizing the amount of control the Bolsheviks exercised. For them, Bakunin’s predictions about the consequences of Marxist rule that the rulers of the new “socialist” Marxist state would become a new elite had proved all too true.

In the 1920s and 1930s, the rise of fascism in Europe transformed anarchism’s conflict with the state. Italy saw the first struggles between anarchists and fascists. Italian anarchists played a key role in the anti-fascist organisation Arditi del Popolo, which was strongest in areas with anarchist traditions, and achieved some success in their activism, such as repelling Blackshirts in the anarchist stronghold of Parma in August 1922. The veteran Italian anarchist, Luigi Fabbri, was one of the first critical theorists of fascism, describing it as “the preventive counter-revolution.” In France, where the far right leagues came close to insurrection in the February 1934 riots, anarchists divided over a united front policy.
In Spain, the CNT initially refused to join a popular front electoral alliance, and abstention by CNT supporters led to a right wing election victory. But in 1936, the CNT changed its policy and anarchist votes helped bring the popular front back to power. Months later, the former ruling class responded with an attempted coup causing the Spanish Civil War (1936–1939). In response to the army rebellion, an anarchist-inspired movement of peasants and workers, supported by armed militias, took control of Barcelona and of large areas of rural Spain where they collectivised the land. But even before the fascist victory in 1939, the anarchists were losing ground in a bitter struggle with the Stalinists, who controlled the distribution of military aid to the Republican cause from the Soviet Union. Stalinist-led troops suppressed the collectives and persecuted both dissident Marxists and anarchists. Anarchists in France and Italy were active in the Resistance during World War II.

Although anarchists were politically active in Spain, Italy, Belgium, and France especially in the 1870s and in Spain during the Spanish Civil War, and although anarchists formed an anarcho-syndicalist union in the United States in 1905, there have been no significant, successful anarchist communities of any size. Anarchism enjoyed a renaissance for a period in the 1960s and early 1970s in the writings of such proponents as Paul Goodman (1911–72), perhaps best known for his writings on education, and Daniel Guérin (1904–88), who develops a communitarian type of anarchism that builds on but goes beyond nineteenth-century anarchosyndicalism, which is now out of date.

Ends and means
Generally, anarchists advocate direct action and oppose voting in elections. Most anarchists feel that real change is not possible through voting. Direct action may be violent or non-violent. Some anarchists do not see destruction of property as violent act.

Capitalism
Most anarchist traditions reject capitalism (which they perceive as authoritarian, coercive, and exploitative) along with state. This include rejection of wage labour, the relationship between a boss and worker, to be authoritarian; and private ownership, similarly, as an authoritarian concept.

Globalization
All anarchists oppose the use of coercion related to international trade, as carried out through institutions such as the World Bank, World Trade Organization, G8 and World Economic Forum. Some anarchists see such coercion as neoliberal globalization.

Communism
Most schools of anarchism have recognized a distinction between libertarian and authoritarian forms of communism.

Democracy
For individualist anarchists, the system of democracy of majority decision, is held null and void. Any impingement upon the natural rights of the person is unjust and a symbol of majority tyranny.

Gender
Anarcha-feminism are likely to view patriarchy as a component and symptom of interconnected systems of oppression.

Race
Black anarchism opposes the existence of a state, capitalism, and subjugation and domination of people of African descent and favours a non-hierarchical organization of society.

Religion
Anarchism have traditionally been skeptical about and opposed to organized religion.