Rivethead also known as fans of industrial music. Rivetheads core beliefs are that music should be progressive and forward-looking, experimental and reflective of the technological age in which we live; to much of mainstream music is either stuck in idle (latching on to whatever trend is current) or in reverse (indulging a superficial nostalgia for the past). 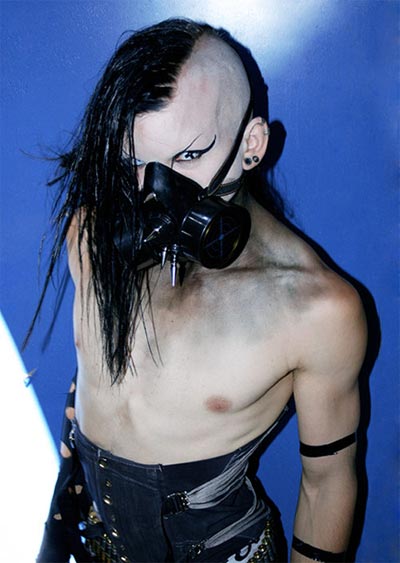 Rivethead is fan or performer of industrial music, a late 20th century experimental rock music form characterized by harsh dissonance, heavy percussive elements, and subject matter that is intentionally transgressive. Industrial music performers typically borrow imagery and fashion from totalitarian regimes as way either of opposing such philosophies or projecting an image of power and authority.
– Orgins of term Rivethead:
The term Rivethead is not new: it’s long been used to describe either workers on an automobile assembly or workers who use a type of metal fastener (the rivet) to build steel frames of buildings and other structures. Chase, founder of Re-Constriction Records, is responsible for the term’s current meaning. In 1993, he released Rivet Head Culture, a compilation including several Industrial acts of the American underground music scene. The same year, Chemlab (whose members were close friends of Chase) released their debut album, Burn Out at the Hydrogen Bar, which had a track called Rivethead.

Just don’t call them Goth!
Rivetheads are different from goths in ideological and musical terms, as well as in their visual aesthetics. Confusion regarding the boundaries of those two youth cultures has heightened because of recent (mid-1990s onwards) hybridization, which has led some people to believe that rivetheads are a goth offshoot, which is untrue.
– Rivethead biggest controversy:
That their adoption of militaristic clothing and industrial bands appropriation of totalitarian symbolism (Laibach) represents a set of political views or affiliates them with groups like Skinheads, Neo-Nazis, nihilistic Punks. It’s all about fashion, music, and striking a pose meant to unnerve Mom and Dad, so take it easy, Homeland Security.
– Rivethead biggest misconception about:
That their penchant for black, leather, rebellion, tattoos, and transgressiveness in any way affiliates them to Goths. It’s kind of like grouping together the kids in the drama club and the kids from metalshop because they go to same school.