Bohemianism is the practice of an unconventional lifestyle, often in the company of like-minded people, with few permanent ties, involving musical, artistic or literary pursuits. In this context, Bohemians can be wanderers, adventurers, or vagabonds.
click for more bohemian definition

Bohemianism is the fastest growing new religion/lifestyle in the world, though its origins date back to ancient history. It contains elements of theology, ideology, mythology, and spirituality. Bohemianism is also a way of life and focuses on the individual and his or her impact on the world. The connection with mythology is that if a human being “jumps onto life’s pages in full color”, he or she will create legends similar to the heroes of ancient world mythologies.

This use of the word bohemian first appeared in the English language in the 19th century to describe the non-traditional lifestyles of marginalized and impoverished artists, writers, journalists, musicians, and actors in major European cities. Bohemians were associated with unorthodox or anti-establishment political or social viewpoints, which were often expressed through free love, frugality, and voluntary poverty. 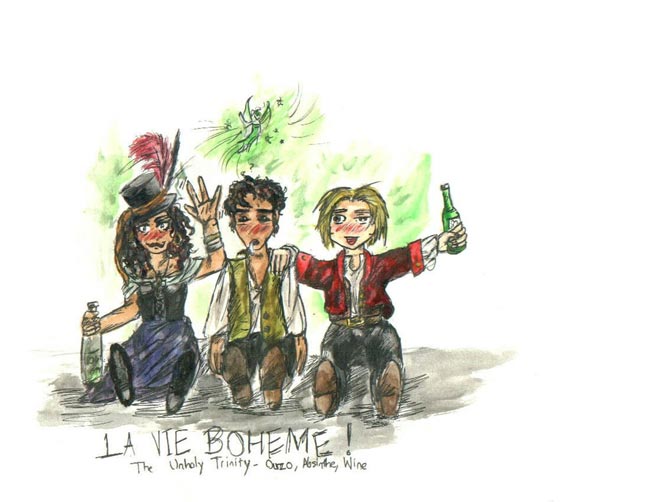 The Doctrine of Bohemianism

– Human Beings are Significant – Bohemians believe that humans have a powerful life force and that they should use this power to become unique individuals. This is very different from mainstream theologies, which demand humility and obedience.
– Life is a Gift – Bohemians also believe that life is a wonderful gift that is meant to be enjoyed. Life is not merely a test. It should be cherished and celebrated, each in his or her own way.
– The Afterlife is Our Impact on the World – Bohemians believe that the Afterlife consists of the lasting impact the Bohemian has made upon other human beings and the world. When a Bohemian dies, he or she will continue to live in the hearts and minds of humans touched by the Bohemian. Additionally, he or she will have created legends and/or works of art that will continue to impact others whom the Bohemian was unable to personally touch.

The term Bohemianism emerged in France in the early 19th century when artists and creators began to concentrate in the lower-rent, lower class gypsy neighborhoods.
Bohemia is a region of Czech Republic; the nomadic, often vilified, group called the Gypsies or Romany are called “bohemiens” in French. How did this word come to describe the poor artists of Paris in the nineteenth century?

Henry Murger tried to distance himself and his subjects from the Gypsies, emphasizing in his preface to Scenes de la Vie de Boheme that “The Bohemians of whom it is a question in this book have no connection with the Bohemians whom melodramatists have rendered synonymous with robbers and assassins. Neither are they recruited from among the dancing-bear leaders, sword swallowers, gilt watch-guard venders, street lottery keepers, and a thousand other vague and mysterious professionals whose main business is to have no business at all, and who are always ready to turn their hands to anything except good”.
But in spite of this, the Bohemians and the Gypsies, in the most prevalent perceptions of both, shared some characteristics. Both groups are known for their vagabond lifestyle, for their merry poverty, for their disregard of money for the pursuit of music, color, and relationships. They are groups that have different priorities than the dominant cultures of their societies, groups that inspire both disdain and envy.
By the mid-1800s, however, French authors such as George Sand and Honore de Balzac had already started to use the word bohemian in a very different sense. The 1932 Dictionnaire de l’Academie Francaise describes this new meaning this way: “One who lives a vagabond, unregimented life without assured resources, who does not worry about tomorrow” (150, translation by EAG).

In 1845, Bohemian nationals began to immigrate to the United States, and from 1848 the wave included some of the radicals and ex-priests who had wanted a constitutional government. In New York City in 1857, a group of some 15–20 young, cultured journalists flourished as self-described “Bohemians” until the American Civil War began in 1860. Similar groups in other cities were broken up as well; reporters spread out to report on the conflict. During the war, correspondents began to assume the title “Bohemian”, and newspapermen in general took up the moniker. Bohemian became synonymous with newspaper writer. In 1866, war correspondent Junius Henri Browne, who wrote for the New York Tribune and Harper’s Magazine, described “Bohemian” journalists such as himself as well as the few carefree women and lighthearted men he encountered during the war years.

Bohemia had outward signs of membership: clothing, occupation, gait, rhythm of life. But it had to be entered through the mind, through some consciousness of belonging. Whether a certain form of dress or rhythm of life was bohemian or not depended – and still does – on how it was meant or taken.
Bohemia has been frequently depicted in literature and music and continues to be a common theme even today. The reasons for this are myriad; partly because the authors saw themselves as bohemian, partly for the sense of the romantic that is carried along with characters of their sort.

Literary Representations
The ideas of Bohemia spread to a wider audience because of the works of authors. Novels such as Les Miserables, Scenes de la Vie de Boheme, and Trilby were best-sellers; everyone seemed to be fascinated with the idea of carefree Bohemians and student life.
These books also play an important role in historians’ understanding of Bohemia. In addition to being entertaining stories, many of these novels can also be considered primary sources: their authors lived a Bohemian life, and based their works on their own experiences.

Beliefs and Philosophies
The Romantic ideal, the image of the starving artist in his empty garret who sacrificed everything he had for his art which has gone unappreciated-What made him give up his comfortable bourgeois lifestyle? There are two theories about this movement of the youth.

First, the Bourgeois saved a Christian ethic, which had been attacked during the revolution. They changed it to suit their own needs, as Miller says “Salvation through success in the communion of nationalism.” However, the youth, always a more radical segment of society than those with families, saw this as a hypocrisy, which meant that Christianity and middle-class values no longer had all, or even most, of the answers. Secondly, while France did not undergo a rapid change into industrialism, it did begin to build up its factories, especially in Paris. The youth movement that later became the bohemians, felt that this was a destruction of natural beauty and that the bourgeois, in general, were a plague upon the earth, feeding upon what was good and natural. In retaliation, the bohemians split themselves away, disassociating themselves from the hated bourgeois, even when they were merely sons of bourgeois families that they would later rejoin.

Music
Bohemia is alive and well in musical theate. Beginning with Puccini’s La Boheme, an adapatation of Murger’s Scenes de la vie de Boheme bohemia has been portrayed on stage, through music. Unlike La Boheme, the placement of Les Miserables on stage is not for the sake of celebrating the bohemian aspects of life, but more for French nationalistic reasons, as Hugo has gone from being the Prince of Youth and leader of the Romantic Army, to being a symbol of all of France. But to prove that Bohemians sing on stage to this day, Rent, opening just in 1996, continues the ideals of the youth movement, but set in modern day America, with modern day issues.

The term has become associated with various artistic or academic communities and is used as a generalized adjective describing such people, environs, or situations: bohemian (boho—informal) is defined in The American College Dictionary as “a person with artistic or intellectual tendencies, who lives and acts with no regard for conventional rules of behavior.”
Many prominent European and American figures of the last 150 years belonged to the bohemian subculture, and any comprehensive “list of bohemians” would be tediously long. Bohemianism has been approved of by some bourgeois writers such as Honoré de Balzac, but most conservative cultural critics do not condone bohemian lifestyles.

In the United States, the bohemian impulse can be seen in the 1960s hippie counterculture (which was in turn informed by the Beat generation via writers such as William S. Burroughs, Allen Ginsberg, and Jack Kerouac).
Rainbow Gatherings may be seen as another contemporary worldwide expression of the bohemian impulse.[20] An American example is Burning Man, an annual participatory arts festival held in the Nevada desert.

There were three main occupations held by Bohemians:

– Painters – The most popular image of the Bohemian shows him at an easel, as in the engraving at right by George du Maurier. Indeed, many did take up the brush to pay the rent.
– Writers – Others followed a literary path, selling their works to magazines or attempting to write great novels. Because it was extremely difficult to make a living by writing poetry or fiction, many wrote
– Students – Not a way to make money, but a vocation that allowed for plenty of free time to spend at cafes. Those who were not studying the liberal arts or a profession such as law or medicine attended Arts Academies to become better painters.

Bohemian communities in the past

Bohemia meant any place where one could live and work cheaply, and behave unconventionally; a community of free souls beyond the pale of respectable society. Several cities and neighborhoods came to be associated with bohemianism in the nineteenth and early twentieth centuries: In Europe: Montmartre and Montparnasse in Paris; Chelsea, Fitzrovia, and Soho in London; Schwabing in Munich; Skadarlija in Belgrade; Tabán in Budapest. In the United States: Greenwich Village in New York City; Venice Beach, California; Topanga, California; and Tiburon, California.
In Australia: Newtown and Potts Point, Sydney and Fitzroy in Melbourne.